Brutus was round Pippin Pringle’s house for tea and bone broth. They were hanging out quite a bit really and the tiny little dog was teaching Brutus how to be intelligent but as Rocky said, ‘you can’t polish a turd’. However, Pippin felt flattered that Brutus had asked him to make him a clever boy and was only too happy to oblige.

Brutus was sat on one chair with a mug of bone broth and Pippin was on the other. Bronte was round Ayla’s house having a girly night with Gigi, Nica and Zara. Fat Harry had tried to gatecrash it to try but was caught out and sent away by Gigi. 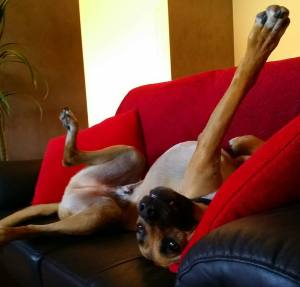 ‘How come Shelby has such large testicles and we don’t have any?’

Shelby is an Italian greyhound with a set of testicles that could be used as door knockers for a castle and was often seen proudly displaying them to make other dogs jealous. 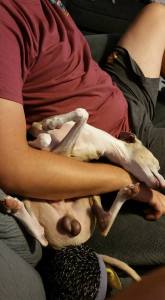 Blushing in response, Pippin replied ‘Well because we had ours removed when we were younger. Some dogs have them and some dogs don’t’.

‘But do you miss having testicles because Shelby’s are enormous and Dash told August who told Rocco who told me that he has been seen bouncing down the road on them like spacehoppers’ said Brutus.

Pippin was now going red as he was not used to talking about such things. Not knowing what to say, he merely muttered something about ‘Testicles just get in the way of stuff’.

‘But wouldn’t you want to have a set like Shelby’s?’ Brutus asked Pippin who had buried his head in a ‘Dogs Today’ magazine.

Pretending that he didn’t care about Shelby’s testicles, Pippin sighed and taking a swig of bone broth, he replied simply ‘No, I don’t do heavy weights as I have a bad back’.

Brutus looked thoughtful ‘Mine were never heavy, they were like two frozen peas in a handkerchief when they were removed’.

Brutus has testicle envy of Shelby (Photograph by Samantha Rose)

Looking up in embarrassment Pippin said firmly ‘Please can we talk about something else’.

‘Just going to the toilet’ Brutus said as he jumped up to go to the loo.

‘Goodness me, where is he?’ Pippin said impatiently. That dog could get lost in anyones house as he wasn’t the brightest dog on the block. Pippin had been told that the other night Brutus had used his head to push open the sliding patio security door and had literally popped the entire sliding security door out of its frame causing his Mum (me) to get up and catch it before it fell on the car (yes really).

The guy that came to fix it yesterday just stared at Brutus and said ‘Yes, well……’ as Brutus blushed at the fact that his hammer-head was capable of such destruction – but that is another (expensive) story and I shall leave that to my husband to tell.

Anyway, Pippin was wondering where Brutus had got to and just as he was about to get up, he heard snorting and laughing as ‘Pigaloo’ (Brutus’s nickname) came staggering out of Denise Pringle’s bedroom walking like a cowboy.

‘Hey Pippin, do I look as good as Shelby?’ Brutus grinned at Pippin who had his mouth open so wide that he could have caught flies in it.

‘Oh my god…..’ Pippin spluttered as bone broth shot out of his nostrils.

There stood Brutus with a silken handkerchief tied around the base of his tail with two scented round (large) candles stuffed inside. Barely able to walk, Brutus walked like a constipated cowboy with a poo fighting to get out of his bum.

‘Let’s phone Shelby and tell him I have balls as big as he does’ Brutus said proudly while struggling to look in the mirror and admire his new ‘man-shape’.

Brutus checks himself out in the mirror (Photograph by Samantha Rose)

‘Aren’t you going to say anything?’ Brutus asked Pippin while trying to organise his ‘balls’.

‘Oh my god…’ Pippin repeated and then mopped his brow and took a swig of bone broth before replying ‘They don’t suit you Brutus, they make you look fat’.

Brutus who has a thing for his figure and likes to remain svelte and musclebound, blushed ‘Do you really think so? Do you think I look better without them?

‘Oh well, if you insist’ Brutus sighed and then swaggered back to Denise’s bedroom to remove the handkerchief and scented candles from between his legs.

(Sounds of Bronte coming in the door)

‘We have had a marvellous evening but I am so glad to be home, I am totally exhausted’ Bronte said dramatically as she fanned her pretty snout with a copy of ‘Who is who at Dogs West’.

Brutus got up to greet her and gave her face a little clean to say hello.

Raising her snout to the air, Bronte asked ‘Can anyone smell vanilla?’

‘Would you like me to fetch you some bone broth?’ Brutus asked Bronte in a bid to impress her.

‘Yes please Brutus, that is kind of you’ Bronte said gratefully.

‘So Pippin, what’s been happening, did you teach Brutus how to be a clever boy?’ Bronte smiled at her brother.

Glancing round to Brutus who was in the kitchen pouring Bronte some of Denise Pringle’s famous bone broth, Pippin sighted some candle staining down Brutus’s legs and a waft of vanilla each time he wagged his tail.

Taking a deep breath Pippin replied firmly ‘I think he has a while to go before he is a clever boy, but he sure knows what to do with candles’.

And with that explanation – Bronte had to be content.