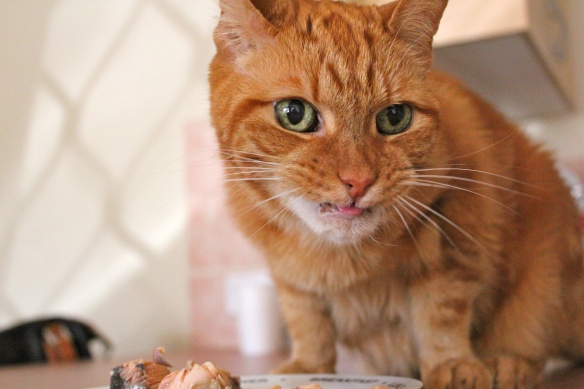 Today is Sunday 9th April – just an ordinary day for Brutus and Rocky, nothing special about it except for plans to take Rocky for a drive to chat to the sheep.

The boys were up at 7.30am ready to go into the garden for the first pee of the day which as any dog will vouch is the best one. Rocky always checks the garden for intruders – invisible or otherwise while Brutus goes to what is now known as ‘The Brutus Tree’ to check to see if any more rats have appeared.

‘Good morning Gordy, how’s it going?’ Brutus grinned at Gordon as he lay curled up on the sofa.

Brutus adores Gordon you see, cleans his ears and his bum and despite Gordon having hardly any teeth, allows the ginger cat to get him in a ‘death-grip’ when he pretends he is an African lion hunting springbok in Namibia. 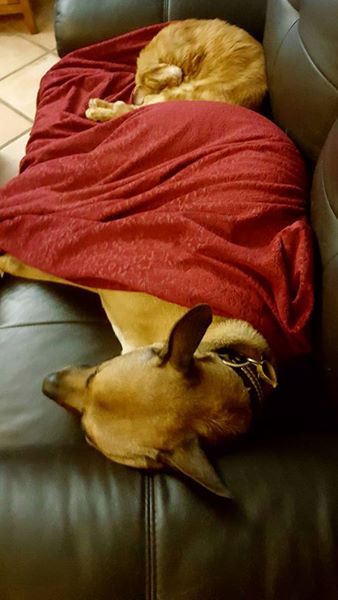 Brutus and Gordon – brothers from another mother

‘Gordon, did you hear me?’ Brutus shouted to his brother. Gordon ignored him and stared boot-faced towards the window and then began to pointedly wash his anus with his hind leg held high in the air.

Looking somewhat hurt and confused, Brutus trotted up to Rocky who was now crossing his legs and muttering something about ‘being desperate for a piss’.

‘Gordon won’t talk to me’ Brutus whispered to the black kelpie.

Rocky shrugged and said something about him getting moody in his old age.

Both boys were let out into the garden and nothing more was said.

‘He looks smaller these days don’t you think, like really skinny?’ Rocky said to Brutus.

Brutus was busy gazing into his tree checking for rats, ‘He is still my big brother and can hunt things in Africa he told me so, I don’t think he is smaller because then he wouldn’t be able to hunt’ Brutus growled without taking his eyes off the tree, ‘Bloody rats – they are hiding from me on purpose’ he added fretfully.

Rocky shrugged his shoulders and trotted back to the patio door to be let back in as it was breakfast time.

As he pressed his snout against the window he spotted the frail cat sitting on the kitchen work surface talking to himself. ‘Everyone is a wanker, I hate everyone, nobody loves me, nobody cares and I am going to puke on the floor’.

Slowly and somewhat unsteadily on his feet, Gordon went to the floor and started making the unmistakable and dramatic sounds of vomiting and trust me, nothing and I mean nothing will make a cat owner sit up and take notice quicker than the violent sounds of a cat throwing up.

He barely puked anything but it was enough to get my attention. Clearing up the tiny bit of sick that I swear he had forced out to be noticed, I petted him and told him how marvellous he was and good on him for sicking up that furball.

‘Yeah right, I don’t believe you love me and I am going to bite you later with my gums and shit in your clean laundry’ Gordon snapped at me and then wobbled off looking like a doddery old man that has lost confidence in his walking stick.

Rocky continued to stare through the window racking his brains to see what could have possible upset Gordon. It didn’t take long to find out either because just ten minutes later my husband came into the kitchen clutching a tin of pink salmon.

‘Happy 15th birthday Gordon’ My husband walked into the kitchen and kissed Gordon on the head and gently lifted him on to the kitchen workbench to have his salmon, which yes I know is unhygienic and all that stuff but I don’t really care.

‘I thought you had forgotten’ Gordon stuttered in his old man voice – a bit like Winston Churchill if you know what I mean.

‘As if we would forget’ I cuddled him – feeling his bones creak.

‘I love you Mum’ Gordon grinned and then promptly bit my hand with his remaining two canine teeth and called me a ‘bitch’.

It was a King that tucked into his salmon this morning, despite having very few teeth he made light work of it and even tolerated me putting on a tie for his birthday photo shoot. 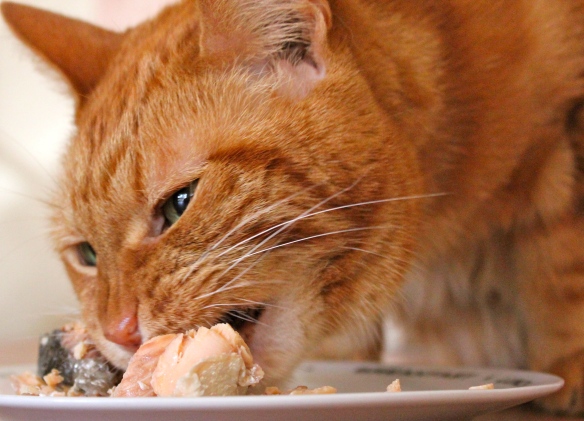 Gordon – hunting his salmon (in Africa of course!)

‘Can I tell my friends that I hunted that salmon in Africa?’ Gordon asked me.

I didn’t dare tell him that he didn’t really have any friends except for Tess and Pippin, but I agreed anyway and it was enough to make him happy. After all, a good imagination and an ability to dream never hurt anyone.

Meanwhile Rocky was outside looking mortified. How on earth did he forget his brothers birthday. Turning round he quickly ran over to where Brutus was to let him know they had some serious making up to do and plenty of arse licking (literally in Brutus’s case).

Rocky is such a thoughtful little dog

After breakfast the boys sat hovering by Gordon watching him eat the rest of his salmon.

‘Gordon we are SO sorry we forgot your 15th birthday, we didn’t mean to honestly we didn’t’ Brutus sobbed. He was totally distressed that he had forgotten and couldn’t stop crying as festoons of snot dripped from his nose and his eyes all red and puffy from being so upset.

Rocky was a bit more dignified but not too proud to admit that he was sorry and tried to bring Gordon his fluffy penguin. 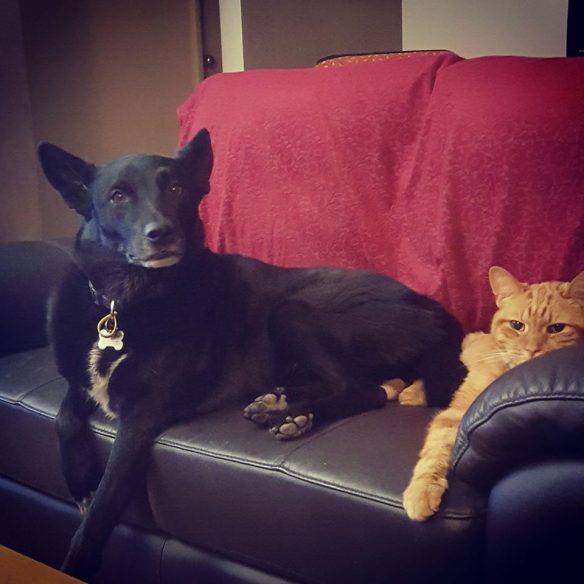 Gordon carried on eating and after a few seconds stared down at the boys. His eyes showing every year of his 15 years, the once 7kg cat did actually look quite frail and tiny.

His grumpy old face softened and he replied to his brothers ‘That’s OK, you have remembered now and that is what matters’.

‘I love you Gordon’ Brutus sighed, wiping his eyes and nose as he had been crying that much – guilt does that to Brutus you see. Brutus feels guilty even when he has done nothing wrong. Rocky dug a 3 foot hole in the garden and Brutus cried for days and apologized for it and even went to the police station to insist he be arrested for a crime that he didn’t commit.

‘I love you right back Brutus’ Gordon replied.

Licking his lips Brutus said hopefully ‘I can help you eat some of that salmon if you like, just as a favour of course’.

‘Bollocks’ Gordon replied, ‘Don’t push your luck’ and with a flick of his tail, Gordon turned round and flashed Brutus his bum.

‘He still loves us then!’ Rocky said sounding ever so relieved.

‘He is still our big brother’ Brutus nodded firmly, ‘No matter how small he is’ – and there was no arguing with that.