Pippin was sat at his desk wearing his half rimmed spectacles whilst attempting to do his spreadsheets on the laptop and yes, dogs can and do wear spectacles, even if they have no glass in them in a bid to look more intelligent and what is more, they can use computers as well but you should all know that by now, especially if you have dogs yourself.

Pippin Pringle at his computer

(sounds of Pippin’s phone ringing) ‘Hello, Pippin Pringle here’ Pippin said in his clipped posh voice that sounds a bit like ‘BBC English’ in the way they announce a war.

Pippin – speaks in a ‘BBC English’ accent you know, just imagine him with spectacles on the end of his nose

‘Yes it’s Amex here, we have it on good authority that Toppa will be coming to QLD to show Mum the ropes about showing, can you pass on the news that he must have his bags packed ASAP and tell him whatever he does, he must not bring budgie smugglers’. Amex said full of his own importance at such wonderful news that would send the Iggies from all over Australia and Puerto Rico, completely into meltdown.

‘What? Are you sure?’ Pippin gasped causing Bronte to put down her edition of ‘Lure Coursing and the modern day Bitch’ and look up at him for answers. ‘Toppa is going to QLD to hang out with Amex and the gang’ Pippin mouthed to Bronte while covering the phone with his paw.

‘OMG, do you think I could come? I have always wanted to travel’ Bronte said excitedly as she had mental visions of her lazing on Surfers Paradise in a skimpy bikini purchased from a trendy surf shop, wearing over sized sunnies while sipping cold water and watching the hot-dogs go by. 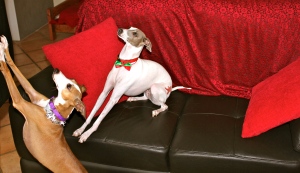 Bronte (left) pleads to be able to come to QLD

‘No, the invite isn’t for you, it’s for Toppa and we had better get the word out ASAP so he can prepare himself for the QLD show ring’ Pippin said firmly, and then added ‘OK Amex, I’ll spread the word and will speak to you later’.

Within ten minutes, Pippin had circulated the news round the entire Iggy group, well with the assistance of Bronte who was ‘snap chatting’ on her phone and had even passed it on to the Texas Iggy Group who had promised faithfully to tell the Iggies in the rest of the USA.

‘I must tell Brutus’ Bronte said fretfully, she had run out of dogs to tell and still had a burning desire to tell someone – anyone, so she would tell Brutus as he had a tendency to hang off her every word purely because she was a girl and she was pretty.

Before Pippin could tell Bronte that Brutus is not a proper Iggy, only a pretend one, Bronte was on the phone to him.

‘Hi Bronte, how are you doing?’ Brutus said putting on his posh voice but really he sounded like Mick Dundee from Crocodile Dundee – in fact, that is actually Brutus, well it could be if Brutus were human.

‘I am fine thanks, I’ve got some news for you’ Bronte said quickly, ‘Toppa is going to QLD to teach Amex’s Mum about the show-ring and they will be all sunbathing on Surfers Paradise with the hot-dogs’.

Now I have explained in my blogs/stories before that when dogs get news or one dog on the street barks at invisible intruders and garbage men, that ‘Canine Chinese Whispers’ always follows and what starts off as one conversation will end up in another entirely.

Canine Chinese Whispers or CCW are always started by Chinese Crested dogs – they are the best at it you see and even if you don’t have a Chinese Crested dog on your estate or suburb, you can bet your bottom dollar that one will have started the rumour from somewhere and spread it around for other dogs to feed on and enjoy.

Because really, what fun are the garbage men if they are just garbage men, when in fact if you ask a Chinese Crested, they can be garbage men with super bones in their pockets, out to eat your family and rip your toys up and shit on your lawn?

Chinese Crested dogs are such majestic and marvellous dogs, they can make any story worth listening to and everything so much more exciting in the ordinary world of a dog that may spend time on his own in the garden. 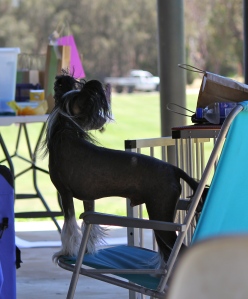 Anyway, Brutus being Brutus totally got the wrong end of the stick and carried the ‘CCW stick’ and run with it like the Olympic Torch, because he really thought that both he and Vader were invited as Brutus only hears what he wants to hear. 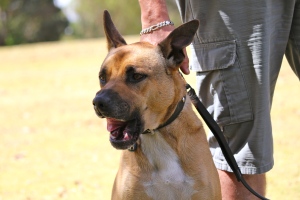 Brutus – he has selective hearing with those satellite ears

‘What? QLD? OMG, I think I might shit myself!’ Brutus yelled and then promptly farted before hanging up leaving Bronte open mouthed in shock at such a response.

‘Shitting oneself for Toppa going to QLD is a bit much don’t you think?’ Bronte said to Pippin and then shrugged her shoulders and wondered who else she could tell.

Bronte – who else could she tell?

Brutus grabbed his mobile and ignoring the surprised looks from Rocky, called Vader to tell him the news. 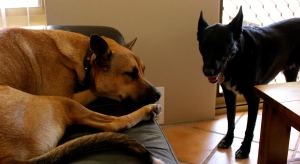 Rocky is surprised by Brutus’s announcement

‘Vader, it’s Brutus – we have been invited to QLD to be life guard dogs on Surfers Paradise and we have to wear board shorts which we can stuff with socks to make our genitals look bigger!’ Brutus said happily.

‘Oh my god!’ Vader barked and then choked on his tongue and had to sick it up again so that he could continue the conversation. ‘I must tell Tess!’

Vader – am I really going to America?

‘Tess, Brutus and I are going to America to see some Iggies from QLD so we can be film stars in a Bond movie and we get to wear a Tuxedo and budgie smugglers and hang out with Tony Abbott’ Vader said importantly while quietly farting in excitement causing the cats to cover their noses and say stuff like ‘Jesus Christ that stinks’.

Brutus and Vader think they are going to be Bond Dogs

Tess looked thoughtful and being rather different as a Powderpuff girl and having pink paws, she had never been one for Canine Chinese Whispers and thought she should do the sensible thing and call Bronte to get the truth.

Tess – a Powderpuff but not into whispers

‘Hi Bronte, it’s Tess – what’s this about the boys going to America to be Bond stars?’ Tess asked Bronte.

‘Oh dear, no it’s Toppa going to QLD to show Amex’s Mum about dog shows and stuff, Brutus and Vader are not invited’ Bronte said firmly.

‘Not invited?’ Tess gasped and then looked at Vader who was pretending that his tongue was a red Hollywood style carpet and trying to persuade the cats to walk on it.

Vader using his tongue as a red carpet

‘Nope, this is Toppa’s adventure, good God, can you imagine Brutus and Vader on a plane?’ Bronte giggled.

By now the news had got back to Toppa that he was going to QLD and he was busy packing his Iggy suitcase which consisted of some clothes, a selection of collars, his favourite toy, some dog magazines and a bone.

‘I-am-going-to QLD!’ Toppa grinned as he poked his reflection in the mirror.

Toppa – going to QLD but will he pick up a QLD accent?

He wondered if he would learn to speak in a QLD accent, perhaps he should start practising now in the hope that nobody would know any different when he got there.

He briefly toyed with the idea of being nervous of flying but then remembered how Brutus told him that he has flown around the lure coursing grounds before and he was OK, so quickly squashed those nerves on the head.

So Toppa is going to QLD to hang out with Amex and the gang, will he come back with a QLD accent? Will he start wearing Steve Irwin style shirts and shorts and will he develop a love for surfing and hot bitches on the beach?

Who knows, not me that’s for sure – I make it up as I go along so quite frankly, anything could happen.

All photographs remain copyright of the photographers, please do not use them or reproduce them without their consent.