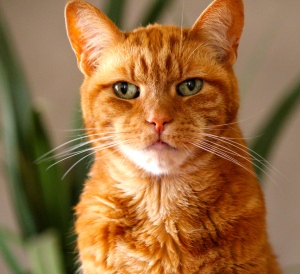 Gordon says ‘Get off my land’ (in a Devonshire accent)

As many of you know I have a 13 year old cat called Gordon whom I bought with me from the UK.  Gordon has always been an indoor cat and one would think that in the privacy and safety of his own home, should never and would never have to defend his territory.

Until now that is.

There is a large male cat in our street, I think he is owned or perhaps was once owned or maybe he is just a ‘free-range’ pain in the arse cat.

He has testicles like two tangerines in a handkerchief and a seemingly endless supply of cat piss that he enjoys spreading on my front door.  Cat piss that is so potent that within seconds of him doing it I can even smell its ‘warmth’ as it infiltrates my door and fills up my house with his scent.

It started off with him doing it the odd time a bit like feline graffiti spreading his art all over the door occasionally to be admired by other cats that may say ‘Nice piss mate’.

My cat Gordon likes to sit at his window and why wouldn’t he?  His home is his castle and he has never had to defend it against outside cats in leather jackets that threaten with menace.

In case you don’t believe that cats can talk and wear leather jackets, I am telling you that they do and they also talk very well.  Entire male cats for instance will always wear leather jackets and talk in tough accents – actually I think that all animals can talk if only we choose to listen to them.

Anyway, this rogue cat that I have named Kevin, is a right toughie.  He has a huge face, is built like a brick with attitude and he walks around our street like he owns it.

He wears a studded leather jacket and is a member of some gang – his own gang containing only him and his testicles and I think he would actually beat me up if I got too close to him.

Kevin frequently gets in to my garden and my dog Brutus has nearly pulled him off the fence by his tail on a couple of occasions as Brutus does not tolerate cats in his garden. 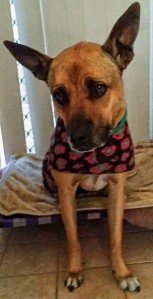 Brutus – no cats in his garden!

One time Kevin the cat told Brutus to ‘Piss off’ and threatened to rip his head off and crap down his neck and also threatened Rocky that he would chop his legs off and spit-roast him with potatoes. 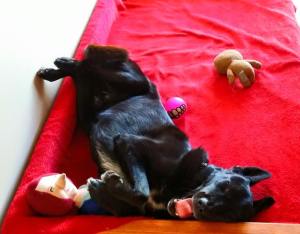 Rocky on a spit-roast

So you must understand that Kevin is a hard nut but I thought somewhat naively that if we ignored him pissing up my door that he would eventually tire of such naughtiness and leave us alone and perhaps piss on someone elses door instead and oh how wrong I was.

This is my ‘hood’

My Gordon enjoys sitting at the door or the window and watching the world go by.  He is 13 years old and is an old man that sits in his rocking chair at the window with his half rimmed spectacles, doing the crossword and says ‘hello’ to anyone that goes by.  It is his pleasure, it is what he looks forward to and he does no harm to anyone as he is in his own house. 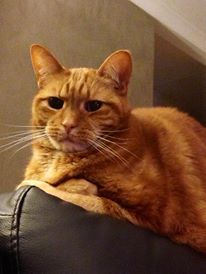 Gordons home is his castle

Well more recently (like every night) Kevin the cat has taken to flashing his anus up at our window and calling my Gordon a ‘ginger bastard’ and then taking spraying up my door and from what Gordon tells me, he can do all of this while doing cartwheels.

‘This is MY hood you ginger bastard and I am gonna get you out of this house and take it over’ Kevin sneered at Gordon one night.  I heard it with my own ears and smelt it with my own nose and I swear to god that cat can use his rear end as a pen judging by the shapes of cat pee on my door.

‘I am fed up with cleaning up after this cat and the house stinking of tom cat’ I moaned to my husband at the weekend after cleaning the door yet again.

‘I don’t know what we can do to be honest’ Hubby replied in a resigned voice.  He was  scared of Kevin in his leather jacket and his big fat tom cat face and testicles like space hoppers.

But no way would I give up and I would not give in; I frantically started to check the cupboards for stuff I could put on the door that would deter this big bully cat from stinking my house out yet again.

After checking the cupboards, I found some citrus cat deterrent spray that we bought last year when Kevin first started spraying.  ‘Ah ha!’ I said triumphantly, ‘This should fix the little bastard’.

I washed the door with detergent first and then I saturated it with the citrus spray and even sprayed the trees and the foot mat outside as well.  It was bound to work, surely?  I would like to tell you that, honestly I would but I would be lying because it didn’t.

‘Citrus shitmus’ Kevin the cat hissed at Gordon through the window, ‘Reckon that will stop me?’ and then did a ‘flash of bum’ on my freshly cleaned and sprayed door and took another piss down it and not only diluted my precious citrus spray but covered it completely until the familiar ‘warm’ smell filled up my living room.  I mean good God, where was all this urine coming from, did he have two bladders or something?

The war is on!

Tonight I was watching ‘Neighbours’ on TV when quite suddenly I could smell cat piss.  ‘Mum, he has done it again!’ Gordon yelled to me from the dining room.

Jumping up out of my chair I ran to the door and opened it in time to see Kevin in his leather jacket run off down the garden while shouting ‘Catch me if you can!’ with his testicles bouncing after him like hungry puppies chasing their mum.

Well I used every single cleaning product that I have in the house plus some citrus cat repellent that SO does not work, some Glen 20 plus some other stinky chemical cleaner.

In the end I got so desperate I considered spraying my new perfume ‘Beyonce – Heat’ that I got for my birthday that makes me sneeze.  Perhaps a dose of her perfume might make this cat sneeze but knowing Kevin he will probably like that as well.

‘Just you wait! I shall find a way to stop you’ I yelled to Kevin who was smoking a cigarette from behind a tree and making ‘cut-throat’ gestures to me.

‘You reckon?’ Kevin laughed and promptly showed me his testicles in an act of defiance.

‘Mum? He won’t take over my house will he?’ Gordon asked me as I glared at Kevin through the window.

‘Over my dead body’ I snapped and reassured my elderly ginger cat as he sat by the window.

‘That can be arranged’ Kevin smirked from the other side.

‘I saw that cat Kevin this arvo, he was wearing a leather jacket walking round like he owned the place’ My husband said to me this evening when I told him about tonights little incident.

‘He does own the place’ I replied flatly, ‘Watch him though, he carries weapons in the form of teeth, claws, attitude and testicles’.

With the door clean (for now), I am planning my next strategy and went on to the Bunnings website to look at an ultrasonic cat repellent.  We probably cant try that though as it will upset Gordon.

I also found some citrus spray that is meant to deter cats which we all know that is rubbish as Kevin is hard core and will probably drink it, bathe in it and cook his mice in it.  I am now thinking of getting some lion turd from Perth zoo because that might make Kevin believe that there is a bigger and tougher cat than him in the ‘hood’.

Or I could just join him in his own game and get my husband to pee up the door just to annoy him.  But knowing Kevin he would just beat my husband up, tie him up with Gordon, Rocky and Brutus and take over my house and claim squatters rights.

Either way – the cat is in the Hood, the piss is on the door and this is war.