Donkey showing off in his new home

Donkey has finally found his home I can exclusively reveal in my blog.  A lovely lady came forward and said that she not only can offer him everything he needs – including his own car, but she can also give him as much love and cuddles as he can cope with.

Donkey Dundee who flew from Karratha to Perth in the eye of TC Narelle, has now settled into his new home and was rather thrilled at being given his own set of wheels which has enabled him to drive around Perth to look out for hot bitches.

Donkey in his new car – a ‘babe magnet’

Donkey is living in a house which is on two levels and not being used to stairs, was confronted with them on his first day.  Aside from saying ‘What the bloody hell are they?’ as he looked on in horror when his new owner walked up them, he was damned if he was going to try so thought he should go through the rubbish bin instead.

We spoke to Donkey to ask him how he was getting on in his new home; “Well it’s kind of cool really, I get my own car and I even get to have a shower as well which is nice as after I have been raiding the bins, I can smell a bit”.

When asked if he missed his life in Karratha, Donkey replied simply: “I miss parts of it, but I prefer it in Perth, the bitches are far hotter and it’s nice having someones face to wash – every dog deserves that”

It is thought that Donkey is so thrilled to be in his new home that he carries a photograph in his wallet of his new family, instead of carrying a torn photo of the Simpsons like he used to. 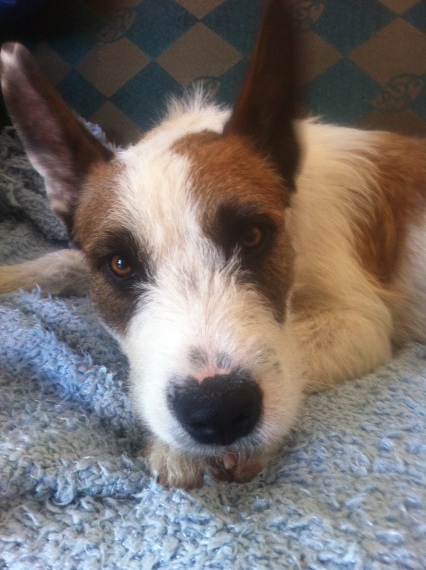 Donkey finally has ‘his day’

Please continue to follow and support the Donkey Diaries which are now for all SAFE rescue animals and will carry on in Donkey’s name.

If you enjoy these stories and would like to donate to SAFE Karratha, their bank details are as follows:

Remember every little donation helps and if I believe that my animal stories can raise money for SAFE Karratha, then I will make them a regular feature.  Interest is already being generated in other countries – Cyprus, USA, UK so I shall make it my mission to keep writing the stories to help their cause.

All I ask, is that if you do donate, if you could reference it as ‘Donkey Dundee’ so that SAFE know who it is in relation to.