Who will win the battle? 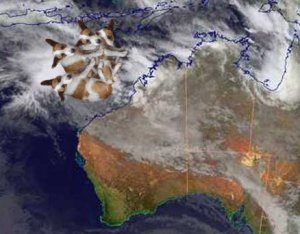 TC Narelle has now been reported as a Category 3 cyclone due to reach a Category 4 at 8am tomorrow morning I can exclusively reveal – well it isn’t really exclusive, in fact it is common knowledge but there is something about putting the word ‘exclusive’ in the sentence to make it sound better.

Residents in Karratha and Dampier (to name but two areas) have been told to prepare their homes for storms and winds.  Dogs have been asked to bury their bones and cats told to hide their fish, kennels have been glued to the ground although one dog with large ears has been reported flying through Dampier despite several attempts to catch him.

Donkey remains in prison (aka kennels) although a rumour has been circulating in the area that a ‘break out’ has been planned – who is involved in this is anyone’s guess but I bet if you asked one of the two ‘Sues’ they would know something about this possible ‘jail break’ but don’t ask Donkey as if he is implicated in any way, he could end up doing ‘extra time’ which could involve listening to Cliff Richard as punishment.

Donkey fans wishing to track TC Narelle can click on this link for updated information:

Donkey’s tag came today, which makes it more official now that he is going to be our dog – I am really pleased with the quality, and am thinking of ordering a new one for Rocky from this company – Red Dingo Dog Tags.

Here is the photo – obviously personal details have been hidden in case female dogs become obsessive and follow him around, and start throwing their underwear at him.

Things left to do before Donkey’s arrival

Well, we have had new fake lawn laid today as the huge concrete garden was tearing up Rocky’s paws and cutting them, and the garden is so enormous, we needed to have a soft area for him to play on, not to mention our garden was the ugliest garden in the history of gardens.  Now it looks a lot better but is still ugly in other parts but hey, we are getting there. 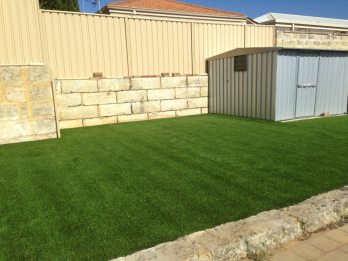 Now the lawn is laid, we have until Sunday to organise the sandpit – Donkey and Rocky are going to have their own designated sandpit – not one of the clam shells as it won’t be deep enough, they are going to have a bigger area and it is virtually bottomless in terms of digging.

We just need to build a perimeter around it and it is a choice between a wooden frame from Bunnings, or if we can lay bricks and build one, that would be better but probably would take too long so if any of my Perth friends have any suggestions, please message me as the sandpit is a vital part of Donkey’s training and enrichment and we need to sort it ASAP.

Toys – I shall be going to the charity shops to see if I can pick up some toys to fill up the toy box in the garden.

Kennel cushion – my husband Abdel is on the look out for a second hand kennel cushion to go in Donkey’s kennel, there is a high chance it could be chewed so we are not going for new until he settles down.

Bowls – his food bowls will be purchased this week.

Council dog registration – our local council have organised this to be posted.

Dog collar – now Donkey appears to have one huge neck – or is the photo deceptive?  Anyway, I have a selection of collars and if none of them fit, I will buy him a new one.

Vet Check – Due to a high number of cases of Parvo Virus in the Perth area, I have a vet coming round on Thursday to give Donkey a second booster which ordinarily he would have been OK but to be safe, he is going to have another C5 vaccine to boost his protection.

So that is it for now, we all just have to pray that TC Narelle doesn’t change Donkey’s plans.  Donkey has been sighted smoking and drinking in his kennel in a bid to calm his nerves, Rocky is on the phone to him regularly trying to keep his spirits up but suffice to say that Donkey is hugely concerned and when he was asked for a comment about the cyclone, he just replied ‘Narelle is a bitch for doing this’

More Donkey updates as they happen.

On a more serious note

TC Narelle is predicted to be a severe tropical cyclone with several towns on alert, and people being advised to get emergency kits ready and prepare their homes/family. It has been on the news several times this afternoon and it isn’t looking that good.

I can’t imagine how worried everyone in the area must be so I am sure I am not alone in wishing everyone in the Pilbara Region to stay safe and hope that this passes without causing too much destruction.

2 thoughts on “Donkey Versus TC Narelle”