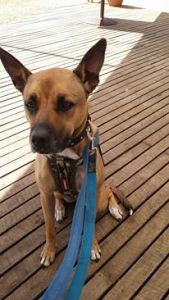 Brutus – named after a war dog

Pippin Pringle had called a meeting at his house, all the Iggies, Chewy, Starbuck and Poppy, Brutus and Vader were invited.

It was a serious meeting and most of the dogs realised it except for the special ones – Brutus and Vader.

‘What on earth could be wrong? I haven’t dug the garden in ages and the hole in Mum’s bra was done by Gordon’ Brutus said fretfully.

‘Not sure but we better go, you know how cross Pippin will get if we don’t’ Vader growled back with a mouthful of tongue.

On arrival at Pippin’s house, the boys were greeted by Bronte who was looking strangely naked and just wearing a smart collar.

‘Hi everyone, what’s occurring?’ Brutus said in his deep voice.

Normally there would be squealing when Brutus and Vader arrived as the girl dogs enjoyed having bigger dogs to flirt with and they saw Brutus as an Iggy anyway as he tried to make himself as small as them.

But tonight it was a case of sensible and respectable ‘Hello boys’ and that was that.
Wanting to make a joke or fart or something, Brutus’s instinct told him not to and he kept quiet, as did Vader.

Placing his spectacles over his long snout, Pippin checked some papers and then leaned over to his laptop and saw an email from Amex in QLD giving him some long awaited info.

Taking a deep breath, Pippin announced in his ‘BBC English’ accent ‘Right everyone, most of you know why we are here except for Brutus as he was too young to come last year, we are here to pay our respects to the Anzacs and the dogs of war’

‘Dogs of war?’ Brutus whispered to Vader, ‘I didn’t know there were dogs of war’.

Vader nodded solemnly ‘Yes there were, but not too many think or remember them’.

‘As you all know there were many great dogs that served in both wars, doing brave things and serving their masters – both man and dog sacrificing their lives so that we could have our freedom’ Pippin said firmly.

Brutus who normally has the attention span of a goldfish, found himself listening to Pippin’s authoritative voice. The other Iggies sat silently and listened to what Pippin had to say.

‘These dogs were also used as moral boosters, can you imagine being away from your family and everything you love, not knowing if you were going to make it home.

‘Being in the trenches, cold, hungry and thirsty, not being able to trust anyone other than your fellow soldier, where every sound was a potential threat?’ Pippin said.

Brutus briefly thought about it, he couldn’t imagine any dog being in a war, after all he hated being outside for more than 5 minutes, let alone sleeping outside with soldiers.

‘Brutus – do you have any ideas as to how great your name is?’ Pippin barked at him.

Brutus blushed and hung his head, he had no idea he just knew it was his name (along with ‘naughty boy’)

‘I shall tell you – Pte Chad Sherrin had a dog called Brutus, he was in the 8th Battalion, Royal Australian Regiment (8 RAR) and Brutus was his first dog. Chad began as a tracking dog handler and was promoted to Sergeant while serving in the 8 RAR’. Pippin added.

‘I am named after a war dog?’ Brutus stuttered, feeling suddenly very proud indeed.
Bronte looked at the big brown gentle giant and briefly thought how unsuitable Brutus would have been as a war dog. But at the same time he looked so proud to share the same name as Brutus the war dog, that he really looked as though his chest might have expanded with pride.

‘There was also a dog called Horrie the wonder dog who was an Egyptian Terrier that made friends with Australian Soldier Pte Jim Moody in Egypt’.

‘Horrie was used as a guard dog and was really good at warning the soldiers about the enemy. Horrie survived when the troop carrier ‘Costa Rica was sunk’ while being evacuated from Grease.

‘He was also hurt by a bomb splinter in Crete. In 1942 Pte Moody was sent back to Australia where he really wanted to take Horrie with him.

This was stopped due to the quarantine laws which as you know are strict’ Pippin said to the group as they hung on to his every word.

‘Moody loved Horrie so much that he smuggled him into Australia in a canvas bag that had wooden slats in it so Horrie could breathe otherwise he would have surely suffocated.

‘He smuggled him in, really?’ Olive gasped as Zara gripped Olives paw while listening in awe.

‘In 1945 Moody found out about smuggling Horrie when they realised that Horrie had been smuggled in illegally and they told Moody that Horrie had to be put to sleep’ Pippin growled.

‘But he was a wonder dog, why did they want to destroy him?’ Brutus stuttered, clearly getting upset about Horrie the wonder dog.

‘Because he should have gone through quarantine’ Pippin said firmly.

‘But you can’t shoot a war hero?’ Vader barked and the other Iggies agreed with him.

‘After being told that Horrie had to be put to sleep, Moody found another dog and gave it to the authorities instead, tricking them into thinking it was Horrie, except it wasn’t and the other dog was shot instead of Horrie’ Pippin barked.

‘What happened then?’ Zara cried, she was easily upset at these stories and Nica was now patting her shoulder.

‘Horrie the wonder dog lived the rest of his life in some rural part of Victoria’ Pippin finished.

‘Dogs have been involved in wars and battles all over the world, they are the unsung heroes of the animal kingdom, and let us not forget the military horses as well.

‘I can’t go into every war dog but those are just two examples of canine bravery. Dogs that kept their masters safe, gave company and affection in times of dangerous conflict when everything around them was hostile’ Pippin sighed.

‘And for Pte Moody to risk everything to smuggle Horrie the wonder dog back into Australia shows how much love and respect he had for Horrie’ Pippin said as he removed his spectacles, puffed on them and cleaned the lenses.

The other Iggies were silent, none of them knew what to say but suddenly they felt very grateful for the likes of war dogs Brutus and Horrie the wonder dog.

‘Here is a poem that was written by Horrie the wonder dog, it is jolly nice if I admit’

“The Wog-dog blossomed into a war-dog as if by magic, despite the fact that we long since had ceased to wonder at his instinct and intelligence and adaptability.

He knew the whistle of bullets,
the whine of shells,
the scream of a bomb,
he knew exactly what to do.
In a moment he could act at some sudden alarm;
he knew at any time what was doing and was intelligently
ready to take his place at the right time and in the right way.

The Wog-dog grew very dear to all of us”

Madam Gigi, Nica and Bronte were now crying. The other Iggies were trying not to cry and Brutus who had never experienced such emotional pain purely from a story, did not know what to do, what to think or how to react.

He did however, know that he was hurting inside but it was completely alien to him.

‘So you see everyone, whilst our humans honour our brave Anzacs, we shall also honour the dogs of war and if you would like to take a minute to pay your respects, I shall get Rocco to do the honours – Rocco, if you don’t mind?’ Pippin said.

‘Good on you lad’ Fat Harry whispered to Rocco as he walked up to Pippin.

Madam Gigi had no idea as to what Rocco was going to do, she could only hope that he would be sensible.

Without saying another word, Rocco took the microphone that Pippin had given him and in a calm, well spoken and deep voice, he started to speak and without any effort, commanded the silence and the respect of every dog in the room.

‘They shall grow not old, as we that are left grow old;
Age shall not weary them, nor the years condemn.
At the going down of the sun and in the morning
We will remember them – Lest we forget’

One by one each and every dog repeated ‘Lest we forget’.

‘That – is MY brother!’ Madam Gigi nodded her head so vigorously as she wiped the tears that fell down her pointy snout. ‘My brother, he is MY brother’.

Brutus who had kept his giant head down through the whole thing had realised that he couldn’t be funny, he couldnt make jokes because he felt too upset, grateful, heart bursting with pride to be an Australian dog.

He might not be a pedigree dog or the smartest dog on the block, but if pride could make him a pedigree – then at that precise moment he would be purebred.

‘Are you OK Brutus?’ Gigi asked him kindly while still wiping her eyes.

Brutus didn’t answer, he turned his head away and replied quietly ‘Yes, yes Gigi, I am fine – thank you for asking’.

But if you looked ever so closely at his face, you would have seen tears pouring down his face as the big dog fought and failed to not cry.

‘Leave him to me’ Pippin said to Gigi.

Pippin had taken Brutus aside to see if he was OK. There was nothing like a dogs first Anzac memorial and Brutus had not been to last years one.

‘Are you OK Brutus?’ Pippin asked him.

‘Yes, I am just so upset at the dogs of war and how brave Brutus and Horrie the wonder dog were and all the other war dogs’ Brutus sobbed to Pippin.

Not used to seeing the big dog show so much emotion, Pippin hugged him.

‘Pippin?’ Brutus sniffed and then noisily blew his nose on Pippins handkerchief that he had handed him.

‘Yes Brutus’ Pippin replied, making a mental note to throw the handkerchief away.

‘We won’t forget the dogs of war will we?’ Brutus asked him.

‘No Brutus, while just one of us remembers, then they will be remembered’ Pippin nodded firmly to him.

‘Lest we forget?’ Brutus asked Pippin.

To every soldier, to every war dog that served this great country and sacrificed their lives so that we could have our freedom – we thank you.

Source for the War dog story – I have taken and adapted the text taken from the link below and all credit goes to the original author. Please take a moment to go on to the link as it is an incredible read.