Brutus ponders on why his beds ‘explode’

You know when you read the words ‘Indestructible’ and it is in the same sentence as ‘dogs’?  Well we dog owners just know that it is all a load of crap and those words are just not compatible in any sentence – ever.

And when you do see a so called ‘Indestructible dog bed’ for sale in the pet shop, it usually comes at a fairly high cost which is fine, but that just means preparing yourself that the bed may last only marginally longer than a ‘normal’ bed but it will however, earn you bragging rights in the dog park that you have lavished such a luxury on your dog.  I know this as I have had six of the above mentioned beds and I am still traumatised by the whole event and I can still see the stuffing on my grass.

Lexie had bought her boxer dog Vader one of those ‘chew proof’ beds; it was beautiful and so well made; in fact Brutus was jealous as he wanted one for himself and pestered me for one.

But knowing that Brutus would make a light snack out of it and I don’t even trust him to sleep on the new bed that Cuzz Bro’s Kennels made for him as he has shown a keen interest in the mattress and has made threats to make it explode in the stilly watches of the night.

So Brutus is limited to daytime use of the bed only until he matures and even then he prefers the leather sofa.

The potential for a ‘bed explosion’ is always there!

Anyway, late last night there were some ‘comings and goings’ in the garden, Rocky was barking, Brutus was barking and Vader was barking and it wasn’t the usual ‘dog choir’ that heralds and invisible or real intruder either.

‘What’s going on?’ My husband asked me.

Shrugging my shoulders I peered out of the back door and saw Rocky and Brutus having a heated discussion through the fence.

I shall now tell the story from the dogs point of view as only they know the truth of what happened.

In the garden – late at night

‘Brutus – are you there?’ Vader’s husky ‘boxer voice’ could be heard from his garden.

Brutus was busy sniffing where Rocky had urinated and was squatting like a girl so he could take a piss on top of where Rocky had marked – and yes, Brutus still squats and pees down his own legs.

‘Bad aim lad, bad aim, why not try lifting your leg like a real man?’ Rocky smirked and then showed him how to do it by pissing on Brutus’s head. Brutus loved that, he always presented his head for Rocky to piss on. 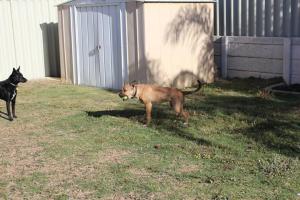 Brutus – the master of pissing down his own legs!

‘Brutus! Answer me, are you there? It’s a disaster, I have been thrown out of the house and nobody is talking to me!’ Vader shouted even louder.

Brutus and Rocky both stopped what they were doing and charged up to the fence. Rocky with his hackles up and tail erect, trotted around full of his own importance.

‘What’s up?’ Rocky said in a sharp voice – Rocky is not Vader’s best fan, actually Rocky isn’t a fan of anyone really except for Tess, Gordon and his tennis balls.

‘My bed exploded in the middle of the night and now nobody is talking to me and Mum has sent me outside’ Vader said as he tried hard to control his tongue which was escaping from all gaps in his mouth like the Royal red carpet. 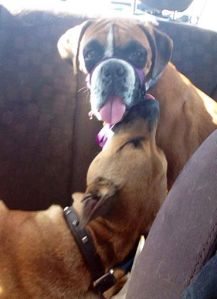 Vader the boxer (and his unfeasibly large tongue)

‘That’s crap man, why did you get the blame? Everyone knows these beds are known to explode’ Brutus said sounding sympathetic.

‘Isn’t that dog abuse?’ Rocky said thoughtfully, he was sure it was. After all everyone knew about the invisible German Shepherd dogs that came to dogs houses and gardens overnight, wrecked them and disappeared into thin air while the pet dogs got the blame.

Vader kept trying to place his tongue back in his mouth like a game of ‘catch’. Devastated at being sent outside, he wondered if the bed had really exploded or could it have been him that chewed his own bed?

He may have nibbled it just a little because the stuffing was so gloriously wonderful to share around, surely that could not be a crime?  However, after a few minutes of thought, Vader quickly decided that he had been a victim of his own bed exploding and he would defend his right to innocence and get a lawyer (Brutus) if his Mum wanted to question him on the matter ‘Admit nothing’ was the motto of every dog that had been a victim of this crime.

‘We used to have comfy beds in our kennel’ Rocky said wistfully before adding ‘Until HE (Brutus) ate them all and spread them round the garden like butter’.  Rocky glared at Brutus accusingly.

Brutus – one minute he is asleep on his bed

The next minute it has exploded everywhere!

Brutus blushed in response because it was true, but the beds had deserved it, they had mocked him and teased him and it was a case of ‘kill or be killed’ when it came to those beds. Besides, he had done the world a favour by killing them, and the plants and digging the trenches in the garden – that was a ‘war effort’ for sure. 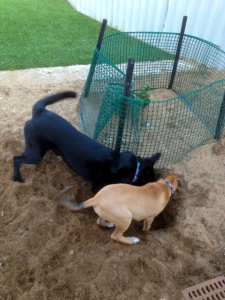 And those plants – they were so naughty!

‘What are you going to do?’ Rocky asked him.

Vader shook his head and flicked drool everywhere; ‘Don’t know, Mum will buy me a new one I expect and I shall see if it is safe to have around and I may or may not kill it again’

Brutus nodded approvingly and said ‘Sounds like a plan’.

Rocky had now tired of the conversation and was herding up the tennis ball and calling it a bastard for rolling away.

‘Boys, come on, stop barking, it’s time to come in!’ I shouted to them and as they thundered down the garden and through the patio door, Brutus was muttering something about ‘being bloody cold out there and could I please put his pyjamas on’.

‘What was all that barking about?’ My husband asked me as I settled the boys down for bed.

‘Not sure but Vader was involved’ I replied and then busied myself in the kitchen to make a hot drink.

‘Rocky?’ Brutus whispered from his bed.

‘Will our beds explode in the night and we get into trouble?’ Brutus asked, sounding worried.

Rocky sighed and said ‘Not if you don’t make it explode it won’t’.

‘That’s OK then but sometimes these things just happen and it’s not our fault, I have heard that exploding bed syndrome is a real condition’ Brutus said confidently. (That’s what he believes anyway)

Brutus – Admit to nothing!

‘Mouse Norris said that her bed explodes frequently’ Brutus whispered to Rocky, after all if it happened to Mouse then it could happen to anyone. 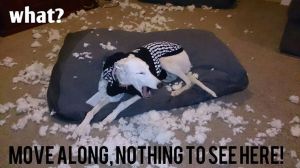 Even Mouse Norris was a victim of her bed exploding!

‘Brutus our beds will not explode unless you make them of course’ Rocky said firmly as he snuggled down with his toy gingerbread man that Lexie had bought him for Christmas. 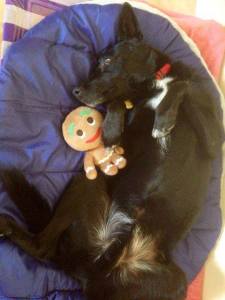 Rocky – trying to sleep with his gingerbread man

‘OK then, I will try not to make them explode’ Brutus replied.

Rocky sighed and shook his head looking a touch sanctimonious about it all – yeah right, many a bed had died in our garden and Rocky himself should not be quite so smug about the subject as one night TWO beds met their demise in our garden and I strongly suspect that Rocky had a ‘paw’ in that incident.

But secretly Brutus liked exploding beds and like many dogs, he got quite excited at the site of all that foam and fluff, it was really too much temptation for any dog.

‘I am sorry Mum, I don’t know how it happened, don’t be cross with me’ Vader pleaded in his boxer-voice that sounded as though he had a mouth full of cotton wool, except that it was tongue instead.

Vader is very sorry for the bed he DID NOT destroy

Lexie knew she should be cross with him but he looked so cute and he was very sorry indeed and he promised never to do it again if she bought him a nice new bed, which of course she will.

Vader and Brutus – members of The Good Boys Club

‘God help us’ Lexie muttered and then started thinking about new beds – preferably ones that did not explode.

So if you ever find your dogs bed has exploded, please explore the thought that it could be the mystery German Shepherd dogs that are active worldwide.  They get into people’s houses and gardens, do the damage, dig up gardens, make dog beds explode and they blame your dog.

They are clever like that – just ask Brutus, Rocky and Vader.