I am beginning to realise that my ‘baby’ Ridgie-Kelpie is more than a touch too spoilt, as is Rocky dog.

Each and every Saturday/Sunday morning at 6.30am without fail, Rocky waits by our bedroom door whinging, telling me to ‘hurry up, get a move on, be quick or we will miss it’. 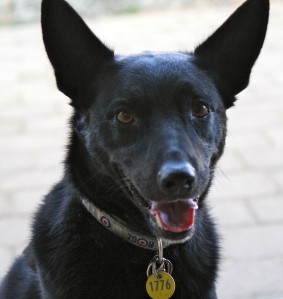 ‘What will we miss Rocky?’ I have asked him on each occasion that I would like to stay in bed for just an hour longer.

‘Life’ He replied, ‘We are missing out on life, it’s started and it comes with tennis balls’.

My little black ‘beetle dog’ as he is known, trembles outside my door which ultimately makes the normally lazy Brutus get up in his crate and demand to be let out so he too can catch ‘life and its tennis balls’ before it passes him by.

That is my hint to get up. I open Brutus’s crate and he always stares at me thoughtfully, pondering on whether or not life will wait for him, Rocky decides on Brutus’s behalf that life in fact waits for noone and neither do tennis balls and Brutus stands up, and as he gets out of his crate, he stretches his long, brown and muscular body and uses his whippy tail to whip the shit out of my legs, the bin and anything else it may come into contact with. It is now 6.35am.

I let both boys out into the garden, Brutus idly stares at the Yucca and palm trees and licks his lips, should he eat them yet or is it too early for a ‘green breakfast’? However, he is still half asleep and hasn’t quite got Rocky’s mindset that ‘life is a tennis ball that needs to be caught and played with until your hips give out and you die, then you go to doggy heaven where you can chase tennis balls until your hearts content or you piss God off by barking and he is forced to put a religious ‘bark collar’ around your neck.

Sleepily I set about fixing the boys breakfast and put a scoop of dog chow in each bowl, placing one bowl in Brutus’s crate, then I tidy his favourite fluffy cot blanket which he literally refuses to settle unless he has it. I have to wash it, put it in the drier and then give it back to him and woe betide me if I don’t. Actually, I am on the lookout for spare thick fluffy cot blankets if anyone has spares they no longer use.

6.45am – I am tired and this time I vow to myself that I will go back to bed with Abdel and leave Brutus in his puppy crate, enjoying his dog chow and he WILL go to sleep afterwards.

Except that doesn’t happen, it never happens and I don’t even know why I try and fight it for I, have created a big brown 30kg 10 month old monster – my ridgie-kelpie Brutus, yes I have made him spoilt and he knows, I know it and Rocky knows it – hell even Gordon knows it.

Shutting the crate, I can hear Brutus noisily and hungrily snarfing down his breakfast, he is such a noisy and piggy little eater – he loves his food and would eat shit if you put sauce on it, actually he has eaten Gordons shit without sauce on it.

I creep out of the living room and sneak back into the bedroom, my goodness, I am hiding from my own dogs.

6.50am – I am back snuggled in bed with Abdel. He takes no notice of me, he knows there is no point, he knows exactly what will happen and he turns to his side and goes back to sleep.

‘You have to come back now! Life is happening, we shall miss it and it comes with tennis balls and palm trees for me to chew!’ Brutus shouts from his crate. Rocky looks on proudly, he has this ‘life thing’ well and truly sussed, you would have to get up early in the morning to catch him out because life will never pass him by, he simply will not allow it to (just like a tennis ball).

(sounds of me sighing)

No answer was the loud reply.

7.002am, I am in the kitchen making a coffee, grabbing my medication to take with it, I stared at Brutus who was in his crate, gripping the corner of his fluffy blanket looking very ‘puppy-like’ in his actions. I guess he is still a puppy at 10 months and it is all to easy to forget that when you look at his size and weight.

Grabbing the blanket, I snuggle up with my iPhone on the sofa and play a few games of ‘Bejewelled’. Rocky walks up to me as he does each and every Sat/Sun morning, he puts his two front paws on the sofa, rests his huge kelpie head on my chest so I get a whiff of dog-breath, and he leans with his hind legs on the floor so it technically doesnt constitute being on the sofa – something he is not allowed to do. However, it still constitutes a ‘kelpie cuddle’ as the little black dog wraps his front paws around my arm and happily falls asleep while snuggling down into my fleecy PJ top.

(sounds of scratching at the door)

‘Oh god, here we go’ I mutter to myself.

‘Quick, it’s starting – ‘life’ is happening and we cant miss it and it comes in the form of ‘Snappy Tom’ cat food!’ Gordon yells from his bedroom in his ginger voice.

‘Bloody hell’ I sigh and then get up to let Gordon out so he too doesnt miss out on ‘life’.

7.10am – I am back curled up on the sofa, sipping my coffee, taking my drugs. Rocky is back on his bed fast asleep, Gordon is happily watching life go by from the dining room window and Brutus has stopped crying like a girl, and is fast asleep snoring like a piglet.

They know I am on the sofa wrapped up in a blanket, they know I will remain here until breakfast and not one of them shall make a sound, they are fast asleep and they are content.

They are also too spoilt, they know it and I know it. This is a weekly occurrence, the 6.30am wake up call, the call to tell me that life is happening, grab it and don’t let go.

For if I was to go back to the bedroom, Brutus would cry, Rocky would wait by the bedroom door and Gordon would just say ‘fuck you’ and destroy the blinds.

I could of course go back to sleep on the sofa should I want to. Except that the sounds of the parrots and birds in my garden is too nice to ignore and I don’t want to miss it, the silence surrounding that is very peaceful indeed. So I won’t go back to bed, I shall stay here.

Besides, we are going out in an hour or so for breakfast with the boys and then take them round the park.

Brutus and Rocky spoilt? Yeah, I reckon they are but what can I say – you have to get up early, life is happening.

And it is happening with tennis balls (according to Rocky).