It is jolly hard to be angry at something that has the cute factor and that can ‘talk’ in typical hound fashion the way in which Brutus can.

Brutus is now a whopping 23kgs of solid chunk and muscle, he looks mostly ridgeback, except for a rather odd and small kelpie shaped snout and kelpie ears and an uncanny ability to herd everything up including stones. The rest is ridgeback and his head his becoming enormous.

This morning Abdel got up to let the boys out and I got up a bit later as I was too cold to migrate from my bed – one could hang coats off ones nipples in this weather but that is another story.

I had gone out to do a poo run to pick up the man sized turds from the garden and Brutus was doing his usual ‘breakfast dance’ where he bounces in circles and kangaroo hops around the garden in a fine display of hunger.

‘I am so hungry, I haven’t been fed in 12 years!’ Brutus shouted dramatically.

‘Twat, you are only 7 months old yourself’ Rocky shook his head in disbelief and then lit up a fag and blew smoke in funny shapes through his nostrils (the shape of dog).

As I bent down to pick up some dog turd, I noticed something that ordinarily could very easily be missed, in fact I don’t know how I even saw it – but I did and now I have seen it, I cannot ‘un-see’ it.

It was a tiny, oh so tiny, piece of my (expensive) fake lawn – chewed up and shat out in dog turd. Glancing down to see where it had come from, I sighted a tiny, perhaps 2cm area near the join of the grass to the concrete. Honestly, you probably couldn’t see it if you came round to my house, but I have what many dog owners have and that is ‘the gift of puppy eyes’ where you can see the slightest most miniscule difference in objects/places where your puppy may have chewed. This gift of observation also extends to sounds – I can hear what is normal and what is naughty in the way of sounds and usually tell you exactly what they are doing by the noise that is being made.

For instance, if I haven’t fed Gordon by a certain time and I can hear a dragging noise from the kitchen, then it usually means that Gordon is pushing glasses along the counter and I normally have about 3 minutes to feed him or the glass goes on the floor – hence the reason Gordon weighs about 7kgs, because he is fed on demand because if we don’t feed him, the house gets it – or we do.

Anyway, there I am in my work attire staring at this piece of dog shit which is containing tiny pieces of fake lawn and I didn’t know whether to laugh or cry.

‘What the fuck have you done?’ I demanded to Brutus who was now ‘breakfast dancing’ all over the garden.

‘Told you that you shouldn’t have done it, you are in trouble now’ Rocky said smugly, knowing that he was a good boy but forgetting he did similar at that age and we won’t even discuss about the time that he dug 4 foot under the retainer wall or chewed up the mortgage documents, (he still maintains that the German Shepherds did it).

‘I was told that grass contains roughage and is good for digestion’ Brutus said in his poshest ridgeback voice – he uses his ridgeback voice when he wants to sound assertive and when he herds up stones or bites my ankles then he tends to use his kelpie voice to sound more intelligent. Although the pile of stones outside my door that he has brought to me and spends ages herding up, makes me beg to differ on that score.

‘It’s fake lawn you twattage and it cost a lot of money!’ I told him, he now had the grace to look embarrassed. 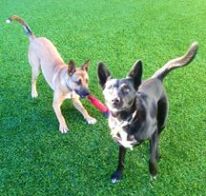 ‘Perhaps if you fed me more often I wouldn’t need to eat the grass!’ Brutus barked back. He was actually ‘talking’ back, you know the way dogs do that funny bark? I think it is a hound thing as my whippet used to do it.

He looked like a large chunky brown turd, with his huge tail wagging in circles like the propeller of a helicopter, his bottom was wriggling and his crumpled mouth that has too much skin around it, caving in around his teeth with each bark, as he tried to justify his chewing of the lawn.

Rocky was shaking his head in disapproval muttering stuff about the puppies of today don’t know that they are born and in his day, all puppies were good dogs that dug nothing and chewed nothing. Gordon sat by the security door smoking a fag shouting the words ‘Bollocks’ and ‘liar’ – it very nearly escalated into a shouting riot of who was the naughtiest or best behaved in ‘their day’ and I am sure that the neighbours didn’t take too kindly to this noise so early in the morning.

‘I can’t believe that you inspected my shit’ Brutus said looking a touch martyred as I continued to pick up the turd from the garden.

‘Can’t you Brutus? Can’t you?’ I snapped, ‘I seem to remember when I took you to the vet when you had kept me up all night with your explosive diarrhoea and I had to take a day off work as I only had one hours sleep and when I cleaned the garden I found several chewed up catkins in your turd’

‘Wasn’t my turd, another dog did it!’ Brutus replied.

‘Oh, and it wasn’t you that produced enough diarrhoea to float a boat I suppose?’ I demanded.

Brutus was blushing now and Rocky was sitting by the shed, smoking his fag and flicking ash on to the grass, rubbing it in and making shapes in the dirt with his paw. Rocky had decided to keep quiet now, as he had shat the bed on a couple of occasions and on the last stomach upset he had suffered, he had even shat in his water bowl which by my own admission, fucking amazed me – I mean that takes skill to do that, even I couldn’t do that if I tried.

‘And what about the time I found red plastic in your poo which I believe, was only last week?’ I said to Brutus.

Stomping back into the house I grabbed the bitter spray that I had bought from City Farmers last week and went back out to the garden with Brutus hotly following me on my heels, nipping my ankles to ‘bring me in’.

‘Ha ha ha ha!’ Rocky yelled and held his belly as he snorted with laughter ‘You are getting the bitter spray treatment!’ The little black kelpie roared his head off. 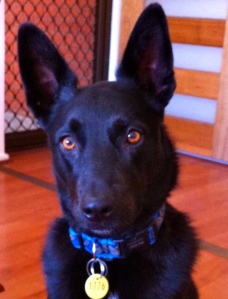 ‘Now that shit, SO does not work’ Gordon shouted from the laundry room. And he is right, because I used to use bottles of the stuff to stop Gordon chewing towels and carpets and even resorted to using Vics Vapour rub to stop Gordon from chewing. And all that succeeded in doing was making Gordon chew it more, sneeze a bit and then come back to me and say ‘I don’t care, I chewed it anyway!’

Brutus doesnt appear to like the bitter spray but is clever enough to know that the entire garden cannot be covered in it. Still, he followed me and watched me spray the part of the garden that he had attempted to chew.

‘What are you doing? don’t put that on there, it tastes awful!’ Brutus said looking alarmed.

Ignoring him, I saturated that part of the grass in the spray and Brutus started to bark and ‘talk’ and ‘breakfast dance’ around me.

‘That won’t work, I will eat the other corner, perhaps we can talk about this – double my food intake and we could be in business!’ Brutus shouted, almost hysterical now. Telling him that I didn’t negotiate with criminals, I refreshed the water bowls while they both followed me to the door to get their breakfast. Rocky went inside first as he is in charge of Brutus and then Brutus followed him, literally trembling at the sight of the bowl of dog chow that sat in his kennel. (I call it dog chow, don’t know what you call it).

‘You will NOT be left unattended in the garden again’ I told Brutus firmly, shut him in his crate. Ignoring me totally, he snarfed down his bowl of food making snorting/piggy noises as he did so.

Telling Abdel about the fake lawn in Brutus’s turd and to keep an eye on him, Gordon who was now on the bed with Abdel, nodded his head and laughed at my feeble efforts to stop Brutus chewing.

‘Yes Gordon, hurry up as I have to go to work’ I replied.

‘Can I eat a towel please?, that nice new bright red one in the bathroom’ Gordon asked.

Staring down at the fat ginger cat that was now wedged behind Abdels back on the bed, I tried not to laugh. 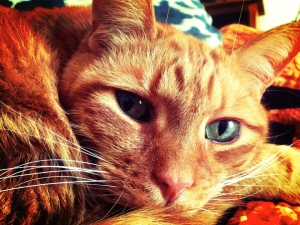 Please can I chew the towels Mum?

‘No Gordon, you can’t eat the towels’, and with that, I said goodbye to Abdel as by now, I was late for work. (sounds of Gordon sniggering at my response – he will eat them anyway).

I left the dogs in the laundry room discussing the mornings events, Rocky was trying to chastise him but they were both laughing. ‘Brutus, did it hurt when you crapped out the fake lawn?’ Rocky asked in admiration.

‘Not as much as the plastic bucket did’ Was Brutus’s reply.

I heard nothing after that as I had left the house but believe me, I wonder if children are easier to bring up than dogs – at least they dont eat fake lawn and plastic buckets.