We are currently as I type, starting a thunder storm – lightening is lighting up my pathway, deep rumbles of thunder can be heard despite the TV being loud and Rocky who is trying so hard to prove himself as head man over Brutus, has been reduced to a quivering wreck and as I can’t afford a thunder jacket for him, I am trying to find alternative ways like singing stupid songs to my animals (yes really).

Brutus is looking perplexed and confused by the loud clap of thunder we have just had, but even more offended by me singing ‘It’s a long way to Tipperary’, Rocky didn’t care and was shaking the shit out of himself by my feet and Gordon just told me to piss right off with that noise and that he preferred the sound of thunder.

‘Jesus Christ on a bike, we are all going to die, save yourselves and your kittens’ Rocky shrieked in a high pitched voice as I tried to eat my apple.

Deciding that I had to share my apple with Rocky as he loves apples, I bit off a piece ‘one for you, and one for me’ I told him.

‘What about me?’ Brutus shouted, oh god, it meant giving the Diarrhoea Brother a new food and trying him on a piece of apple and praying he didnt crap the bed later.

‘Bugger me, that is awful!’ Brutus screamed loudly and looked at the ceiling as though it had assaulted him.

‘And some apple for Brutus’ I said in a happy voice – bloody hell, I could feel Rocky shaking.

‘You two are nothing but a pair of girls, you want loud? You wanna be in the hold of a Qantas jet like I was when I flew here from London’ Gordon said smugly and lit up a cigarette – bastard, he knows he can’t smoke in the house.

‘Brutus, we need to build an air raid shelter – get the supplies in before the rains come and we can sing war songs’ Rocky said literally sobbing, yet trying to remain all ‘alpha’.

‘Bollocks to this, this cannot be normal’ Brutus shouted – his little head creased with concern at the noise – which was probably more from me singing the second verse of the song.

Brutus is not amused with the thunder

‘We are all going to die!’ Rocky cried.

‘Fuck me, I have only just got my big dog teeth through and I haven’t had a chance to use them’ Sobbed Brutus, totally wound up by Rocky while I just simply stopped singing and turned up the TV and ignored them.

‘Don’t you care?’ Brutus shouted and then added ‘You will when we run out of puppy meal and we all starve to death and have to eat bones from the garden’

‘You don’t half talk shit Brutus’ Gordon sighed and then flashed him his bum, knowing that Brutus likes to clean it of an evening. Brutus however was not interested in this fine display of feline ginger bottom.

Gordon tells Brutus all kinds of horror stories about thunder

‘Damn it, I am dead – I have been shot by God from the skies, I am sure I have’ Rocky whimpered and then superglued himself to my feet by the table while checking his belly for gunshot wounds by God.

By now I am swigging my tea (nice cup of Yorkshire tea with one sugar) and watching some animation film on 7Two, while waiting for my crime series to start, when I could hear the sounds of the heavens opening.

‘God is taking a pee!’ Gordon yelled happily, he was so excited – he loves watching storms from the window.

‘Brutus, it’s rain – just ignore Gordon, he is teasing you’ I told him firmly.

‘Oh my god, build Noahs Arc, we are going to die – go and get the Zebra!’ Rocky cried noisily from beneath my feet.

Gordon was snorting with laughter at the commotion and then went into the story of how he played Poker with some zoo animals in the hold of the plane from London to Singapore – how true that is I don’t know as I only have Gordon’s word for it, still, it makes for a nice story.

(sounds of farting and smells of shit)

‘Who did that?’ Gordon spluttered from the sofa, and put his ginger paw over his nose and started making choking noises while trying to comfort Brutus.

‘Sorry, it’s my stomach, my nerves have kicked in – are we dead yet?’ Rocky replied.

‘I didn’t know I was dead, Mum – tell him, am I dead? Please tell me I am not dead!” Brutus yelped as the thunder rattled.

‘Will you all stop it now! Brutus, Rocky is talking shit, Rocky – stop talking shit and stop smelling of shit, you are not dead and Gordon stop stirring shit!’ Honestly, it was like dealing with children.

‘Oh that’s it, I am going!’ Gordon made vomiting sounds as he gagged, and even Rocky blushed at his own wind.

‘Ooops, I think it may have been my heartworm chew coupled up with my nerves and the thunder’ Rocky replied going red at his own smell.

Rocky admits his wind problem and puts it down to nerves

‘Fuck me you stink Rocky, go to the toilet now!’ Gordon shouted from the safety of his bedroom.

Even Brutus looked mortified and disgusted at the smells that came from his brothers arse ‘You do Rocky, you smell of bad stomach’.

‘Will you all be quiet and calm down – it is only a thunder storm and it will be over shortly’ (I said hopefully).

Taking another mouthful of my nearly cold tea, I replied ‘Yes Brutus?’

Brutus stared at me with his cute little pinhead (he has a pinhead) ‘Do you fart when you are scared?’

(sounds of Gordon laughing from the spare room)

Rocky looked up and forgot his fear for a bit and sniggered.

Oh dear god, Dogs ask the most embarrassing of questions don’t they?

‘Yes Brutus but mine smell of roses’. I told him.

‘Awesome’ Brutus said and put his head down in his basket.

‘You are so going to hell for that lie’ Rocky whispered to me as he lay in his basket, he knew the truth. 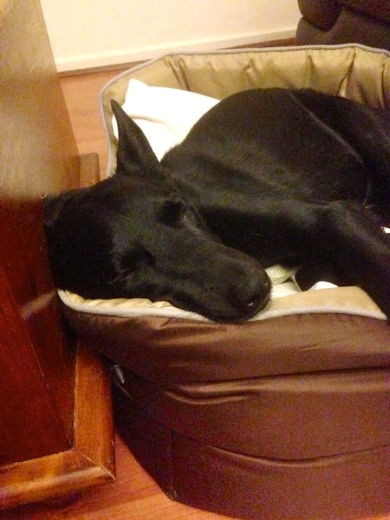 And all you could hear after that were the sounds of Gordon gulping with laughter from his bedroom.

Now I shall finish my tea and as it has gone cold, I shall be a devil and make another one and hopefully this time I will get to drink it in peace.