I only have this story second hand, for I was not there and can only relay what I was told via the ‘jungle drums’ and through heated telephone calls made by Donkey to Rocky, begging him to pay the bail to get him released, so I shall tell it as best I can.

Donkey was taken to prison (kennels) I believe yesterday, because he was left unattended with a mastiff (cross) bitch in the foster carers home and saw fit to empty the food cupboards and eat a substantial amount of Pad Thai noodles amongst other things. 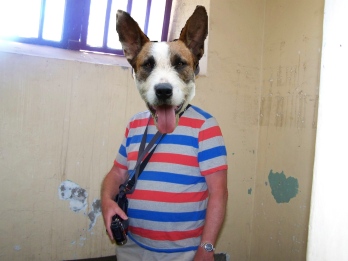 Donkey in his cell yesterday

He had also ‘tasted’ some garden furniture, now Rocky backs this up as he too has tasted garden furniture (and BBQ covers) and said that they all taste shit so fully understands Donkey’s desire to taste things as every dog should for the first time and even a second time, and we won’t discuss Gordon’s continuing penchant for tasting, eating and enjoying towels – even at the ripe old age of nearly 12, which he should have grown out of but hasn’t and has graduated to clothes including my bras.

Apparently there was a huge mess in the house and Donkey tried to deny it but as noodles were stuck to his beard, the evidence was clear.  Rocky had already primed him by telephone telling him to blame the ‘Alsatian dogs’ that are responsible for global canine naughtiness and have been a safe excuse for dogs all over the world but Donkey was a crap liar and couldn’t carry it off. 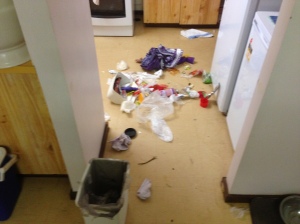 Who made that mess – not Donkey!

Donkey said it was those German Shepherds that did it!

His other crimes include corrupting the resident dog – the mastiff cross bitch and leading her astray to the point she has started to flash her genitals at anything male.

Donkey was appointed a lawyer and fully took advantage of the ‘You have the right to remain silent’ kind of rule but sort of blotted his copybook by farting at inappropriate moments.

It is thought that Donkey will spend his last week in Karratha, in the ‘prison cell’ (AKA boarding kennels) until his flight to Perth on Saturday 12th Jan, where he is expected to land at around 10.10am where he will be met with the official Donkey Welcoming Committee consisting of myself, Tori, Clara and Deidre.

If you would like to attend the welcoming committee, please let me know and we can organise a meeting point.

In preparation for his arrival, a disk for his collar has been ordered, a new collar will be purchased next week once I know how fat his neck is, plus a new food bowl.  We have the kennel, just need a kennel cushion and a ‘camp bed’ for outside plus some toys so keep an eye out if you see anything on Gumtree and let me know.  The toys I am going to scout around the Salvo’s so he can have a full toy box by the time he arrives.

SAFE Karratha have done a fabulous with the homing process for Donkey, their efficiency in processing the adoption and sending out the paperwork has been excellent, not to mention the support that they offer with the rehoming process.

Donkey’s stories are going to continue as Donkey becomes a part of our household, thus making up the ’3rd family member’ with Rocky and Gordon.

If you enjoy these stories and would like to donate to SAFE Karratha, their bank details are as follows:

Remember every little donation helps and if I believe that my animal stories can raise money for SAFE Karratha, then I will make them a regular feature.  Interest is already being generated in other countries – Cyprus, USA, UK so I shall make it my mission to keep writing the stories to help their cause.

All I ask, is that if you do donate, if you could reference it as ‘Donkey Dundee’ so that SAFE know who it is in relation to.

1 thought on “Free the ‘Karratha One’ – Donkey Update!”