Anyone that owns an Italian greyhound will testify that they are not the bravest of dogs and the most seemingly simple of things for any other dog, is a fate worse than death for an Iggy.

This scream of death can be heard in the next suburb and some say, in the neighbouring States of Australia but that is just a rumour which was actually started by Amex the QLD Iggy who claimed to have heard the screams of Nica one day.

Any activity that has resulted in the Iggy scream of death is usually followed up by accusing looks, long guilt trips and the classic hurt gaze of an Iggy where they stare at you with bulging eyes that almost look as though they have tears in them.

This blog entry is dedicated to Zara and Nica – two beautiful Italian greyhounds that are characters in my stories and owned by two lovely ladies that are the epitome of ‘coolness’ and look exceptionally trendy just by their presence so it is no surprise that their Iggies are cool as well. 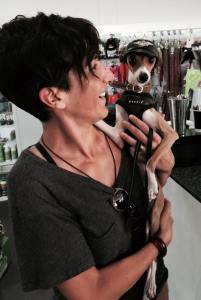 Francesca and Zara – part of the cool gang

At Lexie the Dog Groomers House

Zara and Nica were due at Lexie’s this morning for a quick nail trim. Now please understand that when I say ‘nail trim’, in Iggy terms it roughly translates to having all four legs removed in the most brutal fashion and it jolly well sounds like it too.

Well today I was to witness it for myself as I was round Lexie’s to organise our afternoon play session with Brutus and Vader so I can totally vouch just how traumatic it is for Iggies to have their nails (legs) cut.

Their Mums pulled up in the tiny little car which is really an Iggy car and tiny like the Iggies but full of attitude and fun.

Zara who is a cheeky young pup and in my stories she wears one of those special helmets to stop her bumping into things and hurting herself – just imagine a tiny Iggy with a huge bobble head wearing a crash helmet and you will get the idea.

She was so full of beans and speaking in her super fast voice that goes up several octaves at the end.

‘Hi everyone, how are you all, we had such fun, we had breakfast, we played in the garden, I went for a turd, Nica vomited for attention, everything happened, how are you all?’ Zara said without drawing breath and totally forgetting why she was at Lexie’s.

‘Oh god, please don’t cut my legs off, don’t kill me, I need my legs!’ Nica sobbed dramatically into her handkerchief. Why she had started crying so soon was beyond me, she wasn’t even in the salon.

It was decided that Zara had to be done first so she would not be alarmed by Nica’s dying dog routine.

Nica was already looking distraught at the thought of her sisters legs being amputated and had started the warning system to try to ‘save her’ from the dog groomer.

‘Zara, call the police, if they cut your legs off tell the police, tell them that you need your legs!’ Nica shouted after Zara who was wearing her special helmet to stop her bouncing into things and hurting herself.

‘I will be OK Nica, I can do this!’ Zara said with a fake confidence which came from wearing her tough-girl harness.

‘I can do this, I can do this, who needs legs anyway, they are so overrated’ Zara said quickly in between making whimpering noises. ‘Where is Brutus, I demand to see Brutus, I know he is here somewhere!’ Zara shouted.

Brutus had been there twenty minutes before but I never told her that but as she has met Brutus before, she has decided that she quite likes him.

‘Oh my god, was that my leg? You chopped my leg off! Nica was right all along!’ Zara cried, ‘I am SO going to report you!’ Bashing her special helmet around as her head wriggled around like a bobble head.

‘That’s you done’ Lexie the dog groomer told Zara and carried her out to her parents.

‘I did it, I fought them and I won and I still have my legs, it didn’t hurt and I was a brave girl and everything!’ Zara reassured Nica who was having none of it as Zara was still trembling at being assaulted by the nail clippers which was a dead giveaway that she wasn’t as brave as she was making out.

Handing Zara over to her parents, a quick swap was done in return for Nica who was announcing to anyone that would listen and everyone that wouldn’t.

‘I have done my Last Will and Testament, I leave everything I own to Zara, including my collar selection, I leave my iPad to Pippin because he loves iPads and I leave anything I vomit to Brutus’ Nica howled.

‘And if I should survive this ordeal, I have ordered myself a wheelchair for when I am disabled and Brutus can push me around in it and I shall need a specially adapted house for disabled dogs plus a tartan blanket to cover my knees’ Nica said firmly as Lexie carried her inside the salon.

‘I love you all, never forget that and I hope you can love me too, even when all of my legs have been amputated in the guise of a nail clip’ Nica squeaked as Lexie shut the salon door so all Zara could see was Inca’s mouth opening and closing like two biro pens clicking together.

‘Love you Nica and I will love you with no legs as well’ Zara barked and then decided that she too had better check all of her legs were there and not amputated along with her nails. ‘Oh my god help me! That hurt!’ Nica squealed.

‘That’s OK Nica, I haven’t touched you yet’ Lexie reassured her.

‘Just testing’ Nica said with her lips pursed together, ‘Keeping you on your toes’. ‘Ouch, that was my leg, that was my other leg, that was all of my legs, that was my head!’ Nica cried and then started reciting various prayers that dogs do when they get desperate.

‘Oh my god, how in the name of god can you expect me to run around on stumps? Did you have to cut my legs that short?’ Nica said in a voice so high-pitched that she sounded somewhat like Aled Jones with his testicles slammed in the door.

‘Nica, don’t be so dramatic’ Lexie said firmly and then picked up the nail file to finish the job.

‘What are you going to do with that?’ Nica looked horrified as Lexie gripped the nail file.

‘Tidy up your nails’ Lexie laughed and then set about filing Inca’s nails down to make them tidy.

‘Zara please come and help me, go and tell Brutus to come and get me!’ squealed Nica.

Brutus however was oblivious to the noise as he was helping his Dad to finish his toast next door.

‘I won’t be good as an amputee, do amputees lead next to normal lives?’ Nica cried fretfully.

Nica was soon finished and carried out back to her owners looking as though someone had bashed her and cut her own head off and used her snout as a fountain pen.

Fanning her pointy nose with her paws, she briefly glanced around to see if any of the neighbors dogs had seen anything.

‘And I am never coming back either!’ Zara said firmly and then shouted ‘Oi, you – brindle staffie over the road, what are you looking at?’ to our neighbors dogs over the road.

It was very easy for Zara to be brave with other dogs while snuggled up in her owners’ arms but she always feels tough when she wears her camo harness.

The girls were put back in the car and as quickly as the drama had started, it had all finished.

‘Are you OK Nica?’ Zara asked her sister. Dabbing her eyes and composing herself,

Nica cried ‘Yes, I think so – now. My legs have grown back which is something’.

‘That’s good, I think my legs have grown back as well’ Zara said gratefully and then bent down to admire them.

‘See you in three weeks’ Lexie waved to the girls and their mums.

‘Oh god, we have to go through this again?’ Zara barked in a horrified voice.

‘Awful isn’t it, it’s a wonder we don’t run out of legs’ Nica sighed.

As the car pulled out of the driveway I could just see Zara’s special helmet wobbling around and Nica was being quite animated as she was telling Zara her grand plans to vomit everywhere once she got back home – purely for attention.

Iggy nail clips – it is never ever just a nail clip; it is a partial or total leg amputation at the very least.  Never underestimate it. 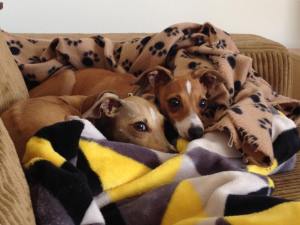