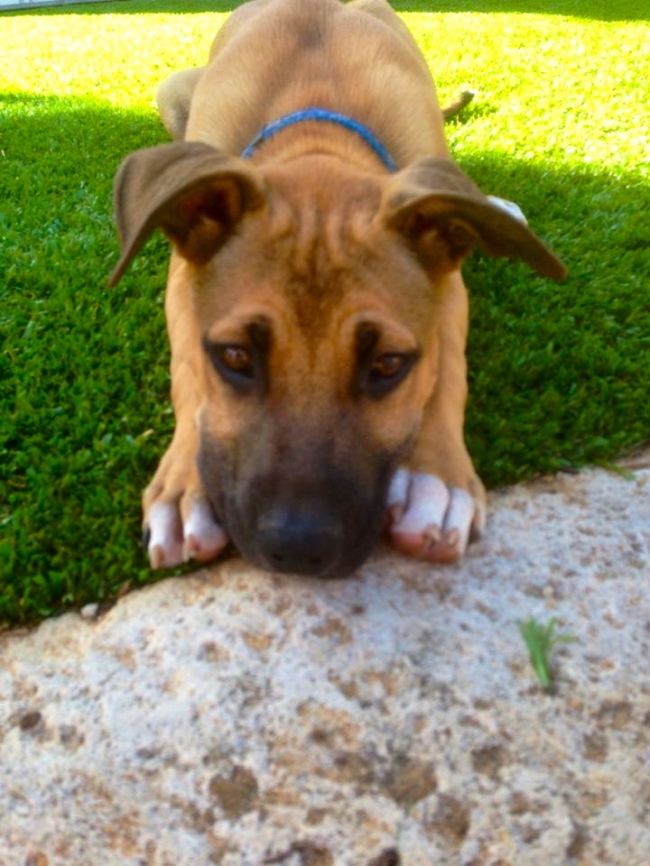 This morning I took Brutus to our local vet to have his stitches removed and to say that Rocky was devastated that he wasn’t going, is an understatement.

‘Where are you taking him?’ Rocky demanded, his ears and tail erect, and his body language showed that he was pissed off.

‘To the vet to get his stitches removed’ I said firmly and clipped Brutus’s leash onto his blue collar. His little brown body wriggled as he was so excited.

‘Bastard, why does he get to go and I don’t, can I have my stitches removed too?’ Rocky asked, looking really jealous now.

‘Rocky you are such a dick head, you don’t have stitches!’ Gordon sniggered from the safety of the dining room table. Rocky flipped him the bird and stuck his tongue out back at Gordon.

‘Yeah, but they don’t know that’ Rocky replied. In the end he became so upset because he wasn’t going that I had to shut him up in the laundry room to calm down.

And as for the language that came out of that kelpie dogs mouth as I put Brutus in the Yaris and secured him to the seat belt in the back, well that was truly shocking and the last word I heard from Rocky’s mouth was ‘wanker’.

We got to the vets a bit early and had to wait outside which was fun with a partially leash trained pup who was thoroughly over excited and trying to herd up birds and stones – adopting the ‘cattle dog crouch’ when they go down to herd.

‘Brutus, you can’t herd up stones, they are not going anywhere’ I laughed at him.

‘But they might be, you never know’ was all he replied and then tried circling the stones to make sure.

A car pulled up in the driveway and I could just make out the head of a small white fluffy dog in the front seat next to his owner.

‘Puggles, come on get down’ An elderly man got out and spoke to his dog.

‘Piss off, I am not jumping that height, are you trying to break my cruciate ligament or something?’ the white dog snapped and then glanced in the mirror to smooth down his beard and make himself look presentable.

It was a tense stand off and Brutus looked interested in the stubborn white fluffy thing that resembled a sheep, that refused to jump down from the SUV.

I will in his favour say that I don’t blame him because many injuries can be caused from dogs jumping in/out of cars and Brutus is terrified to jump in/out of my car so I always help him.

Puggles the white dog (or sheep according to Brutus) was eventually lifted down and you could hear him bossing his owner around and saying things like ‘watch my stitches’ and ‘don’t mess with my fur’.

Brutus looked enchanted at the dog (sheep) and looked up at me and said ‘Is that a sheep, can I herd him?’ which made me laugh. Brutus may be a kelpie/ridgeback but he is 95% kelpie in behaviour and looks so cute when he adopts the herding position.

Fuggles walked up to Brutus and promptly pissed on a pile of polished pebbles, he lifted his little leg as high as it would go and strong yellow urine dribbled down his pristine white coat.

‘How did you do that?’ Brutus asked him in admiration. Brutus is still at the squatting stage and when he did try and lift his leg to copy Rocky, he fell over. Mind you, Rocky didn’t cock his leg until he was two years old – and I am not kidding you either, very late developer. In fact Rocky barely has a penis, it is more like a mealworm.

‘Puggles has been de-sexed, he is here to have his stitches out’ The owner said to me and then shook his head as Puggles tried to dig up the concrete floor with his hind legs to ‘spread himself around’.

‘He is only 8 months old’ His owner added.

Brutus sniggered at the white dog and said ‘Why are you digging up concrete?”

‘Spreading my piss around’ Puggles said matter-of-factly and then added ‘I am still very alpha even though they made me have the op’ Puggles looked accusingly at his owner.

‘What op?” Brutus asked – such an innocent boy and a virgin too, bless his socks.

Puggles looked at Brutus as though he were stupid and lit a cigarette and exhaled deeply. Flicking ash into the pavement, he rubbed it in with his paw, making it go all smudged and grey.

‘De-sexing op, so you had it done as well?’ Puggles asked Brutus.

‘Yeah, I kept mating the cat and humping my brothers head and pissing on his bed/head/everything’ Brutus replied sadly, almost missing the experience. Gordon I will add, is very glad he has been done because he only has a tiny bottom and it is certainly not meant for amorous puppies with a thriving sex hormone production.

Just then the nurse opened the surgery door for us all to go in and I popped Brutus on the scales and am pleased to announce that he now weighs 12.6kgs. If you remember when he came out of hospital he was around 7.6kgs – I think so he is doing marvellously and is looking rather good.

I went back to the counter to give the nurses the weight for his records when I heard a commotion.

‘Puggles, you naughty boy, you can’t do that here!’ Puggles owner looked horrified.

Puggles sat by the door and had just finished taking a large shit by the mat.

Brutus still being of the giggly childish schoolboy mentality, snorted with laughter – he takes after me you see, make me laugh and I snort loudly, I can’t help it.

Brutus was snorting and giggling and yelling his favourite expression (you all know what it is!) ‘Turd legs’ to Puggles who looked thoroughly pleased with himself at the monster turd he had dropped by the mat.

A large cat in a pink basket pursed his lips together, disgusted at the scene and yelled ‘Could you have not waited until you had used your litter tray?’

‘Chew on that big boy that will teach you to rip my balls off!’ Puggles shouted to his owner and then promptly turned around and gave him full view of his fluffy white bum which now had nasty brown bits on the side. My goodness am I glad my dogs dont have fluffy white bums that could be called poo magnets.

The nurse calmly came round from the counter armed with rubber gloves and some paper and something to clean the matt with and as quickly as it was produced, the offending turd was picked up and disposed of. But not before Puggles yelled to the nurse ‘There are plenty more from where that came from’ and vowed to shit in his owners bed when he got home.

‘Don’t you ever do that Brutus’ I told him, trying not to laugh myself, really it was very funny and I do have a toilet sense of humour, so does Rocky and actually Gordon as well. I have lost count of the times that Gordon has had a hard piece of turd stuck to his bum and has released it and played ‘ping pong’ with it in the hall way.

Brutus was called in by the nurse to have his stitches out, off he trotted with his super abnormally long tail wagging behind him – you can see the vertebrae of his tail ‘clicking’ by the tail bone when he wags it, as though it is too long for his spine/body.

The nurse said he was a very good boy but his stitches had become too tight so I have to watch it doesnt weep or get sore and that I had brought him in just at the right time to get them out (9 days) but either way, they were more than ready to come out.

I bought him his heartworm/multiwormer as well – he now requires the same size heartworm treatment as Rocky which is good. Vet predicts he may reach up to 25 kgs so could be the same size as Rocky or slightly bigger. He is going to be a chunky old ‘unit’ though I should imagine.

We said goodbye to Puggles (Turd Dog as Brutus called him) and I lifted Brutus into the car and secured him and we drove home.

‘Where the hell have you been?’ Rocky demanded and inspected Brutus thoroughly as a mass sniffing of genitals took place from both dogs.

I let both boys outside to let off some steam and I could hear Brutus excitedly tell Rocky about what had happened at the vet with Puggles.

‘Really? He took a shit on the mat?’ I heard Rocky say, he sounded quite jealous. Bastard better not try that when I take him to the vet.

I still have memories of when I worked at the Royal Veterinary College as a Veterinary Nurse and my whippet bitch Rema took a shit on the platform inside London Marylebone Station (pets can travel on public transport in the UK).

She did several hard nuggets that rolled all over the platform and thank God I had a poo bag because I was scrabbling around a busy commuter platform trying to recover nuggets of turd. Rema blamed it on the high fibre diet, the commuters blamed me for the smell and all I can say is thank god I was in a nurses uniform so I could pull off the ‘I am an animal nurse’ kind of face and deal with this shit every day.

So you can forgive me for thinking those days are behind me and I do not want to encourage my boys to open their bowels in inappropriate places.

Abdel and I are taking the boys out for a walk later, just need to keep an eye on the suture site as the nurse said but I think it will be OK.

It has gone very quiet in the garden so I had better check on the dogs and hope that whatever they are planning to do, it does not involve what Puggles did at the vet this morning.

Have a lovely weekend everyone.