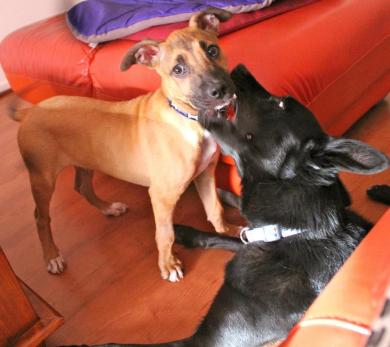 Brutus has taken to picking up lovely pieces of crunchy dirt and stuff and I only ever seem to catch him as he is happily at the end of crunching/swallowing whatever crap he has picked up and although I can open his mouth, I normally only find crunched up soil/grit and try as I might, I cannot get him out of the habit.

Please someone tell me this is normal behavior as Rocky was 5 months old when I got him and was never into that, he loved digging right from the word ‘go’.

So this morning I had a nicely cleaned out 2 litre plastic milk bottle and I removed the lid and put some puppy meal inside and gave it to Brutus. We used to do this with Rocky and enjoy watching him joyously run around the garden with a milk bottle in his mouth barking and then have to pick up the pieces afterwards.

Brutus was thrilled with his new toy and ran around the garden pushing it with his nose so that the biscuit fell out. Unaware that there was biscuit in the bottle, he didnt even see Rocky scooting behind him like a Dyson vacuum polishing up the puppy meal.

‘Ha ha ha, Derro Dog!’ Rocky yelled happily in between eating biscuit – as this was something we used to do for him, he knew exactly what was coming out of the milk bottle.

‘What are you eating you greedy bastard?’ Brutus shouted, his language already become ‘choice’ as Gordon and Rocky swear all the time.

Brutus bit his bottom lip, stopped for a minute and looked somewhat confused at where all the puppy meal was coming from. But the temptation got too much for him and he muttered ‘Bollocks’ and then carried on shoving the milk bottle noisily around the garden with Rocky continuing to scoot after him picking up the biscuit.

The noise was exceptionally loud and I had to shut the bedroom door as not to wake Abdel but I am sure the grating/scraping sound across the floor could be heard by the neighbours.

Toilet training – another dry night! Brutus actually woke me up yelping at 6.25am telling me that if I didn’t get to his crate pronto, he would piss the bed and not only would he piss the bed, but he would do cartwheels to spread it further. Rocky was snorting with laughter on his bed as he had dared the tiny puppy to say it, in fact Rocky is teaching him to swear as he finds it funny when Brutus swears in a puppy voice. A puppy voice for those of you that don’t know, is a high pitched cute ‘Babe – pig in the city’ kind of voice and the word ‘Bollocks’ sounds hilarious when said by a puppy.

I let Brutus out as one does not argue with a nearly toilet trained puppy with a foul mouth, not to mention the joys of finding a dry kennel, even if the paper has been shredded up by the lean mean shredding puppy machine.

Another bad habit Brutus has developed is once I have done a ‘turd run’ and picked up the shit in the garden which I like to do straight away, Brutus bounces up and down like a springbok and rips a hole in the bag so the turd sprinkles round the garden like a brown shower of shite.

‘Yippee!’ Brutus yells as he does it and Rocky claps from the side of the garden to encourage him ‘Go on Brutus, do it again!’ Rocky is reliving his puppy years through Brutus and is thoroughly enjoying it.

Aside from the crunching of various garden matter, ripping holes in turd bags, everything is going swimmingly.

Over and out from me